A boat trip on the Lys River as from Ghent towards Deurle with a historical ship from the 18th century!
Welcome by our guide on a location chosen by you in the centre of Ghent (parking, hotel,…). We start our evening with a guided walk through the historical centre of Ghent, city of Charles QUint. During this walk of about 1.5 hours we will see the most important curiosities of the city: ‘Vrijdagsmarkt’ with statue of Jacob Van Artevelde, St. Bavo Cathedral, St Michel’s Bridge, Graslei and Korenlei and many more,…
We end our walk at the ‘Gentse Barge’, situated close to the Palace of Justice.
in the middle of the 1990s Captain Andre De Wilde and Walter De Buck took the initiative to realize their common dream: ‘to se a barge sailing again on the waters in and around Ghent’.
Because of the drive of Captain Andre De Wilde, this project got the wind in its sails. In 1999 this project was finally launched. the construction of the Barge became one of the most prestigious projects for the unemployed people in Flanders. Through a unique co-operation between the government, private companies and the ‘VDAB’ (Flemish employment agency), the students of the collective of sculptors ‘Loods 13’ (Ghent) and the ‘Steenschuit’ (Boom) gained useful experience and were retrained.
Unfortunately, Captain Andre De Wilde (+2002) couldn’t experience the laughing and inauguration of his brainchild. By giving his name to the Ghent Barge, the board of directors of the Ghent Barge honors its deeply mourned helmsman.
The project ‘The Ghent Barge’ is a unique concept with social, historical and socially-conscious value. According to the traditional methods a replica of an 18th century historic ship from Ghent has been crafted. It was a flat bottom tow barge which had been used by the States of Flanders to transport passengers and goods on the ‘Brugse Vaart’ from Ghent to Bruges since the 17th century. For almost 200 years it has regularly provided this service between Ghent and Bruges. The exploitation of the Barge was leased after it had been put up to public tender.
The Barge was prestigiously furnished and decorated, and got famous because of its comfortable way of travelling and culinary delights. The presence of kings, emperors, archdukes and other dignitaries proved the true ambassador’s role of the Barge. In the 19th century the Barge had to compete more and more with the stage coach, the iron steamboat and the first grains, which resulted in the stop of the official barge service in 1839. Eventually as a sad ending the last barge was sold as firewood in 1908.
We sail in the direction on the Lys until Deurle and back during about 3 hours. During this trip we enjoy the beautiful scenery and a delicious dinner.
3 course menu, including aperitif with appetizers, wines, mineral water and coffee. 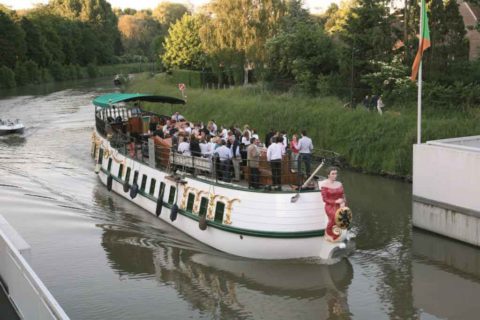 Example of menu on this boat trip Ghent

A few highlights of the Dinner cruise on the Lys River with ‘De Gentse Barge’!

More information about our boat trips Ghent and river cruises